Skip to content
MENU
Gamescott / News / The surprising relationship between diet and the onset of multiple sclerosis, according to scientists 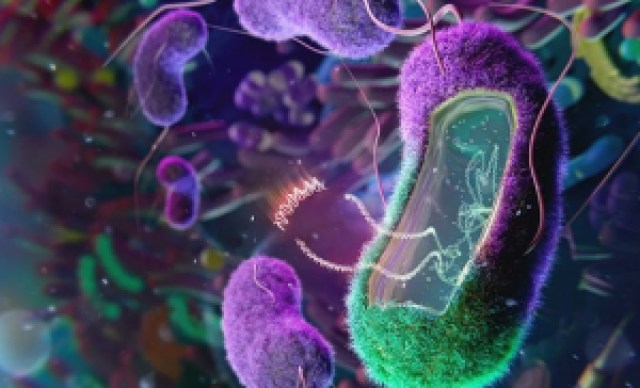 The composition of the microbiota (which includes different bacteria) influences the inflammatory processes that can lead to the development of multiple sclerosis / Thom Leach, Amoeba Studios

Researchers from Argentina and the United States published a review in Nature Reviews Neurology. How gut microbiota influences the brain and what therapies are on the way, scientists said.

The multiple sclerosis It occurs when the material that protects neurons is damaged. It is a disorder of the nervous system and can present with the symptom of blurred vision or double vision, red-green color distortion or even blindness in one eye. It is known as the “disease of a thousand faces” because each patient can have very different symptoms. But what are the factors that lead to damage to the coverings that surround neurons is one of the questions challenging neuroscience research today. One of the answers is in the gut.

It is believed that the person’s immune system produces an erroneous reaction that ends up affecting the brain and spinal cord. In this process, there is a factor that is
getting more attention. It is the collection of microorganisms, such as bacteria, that live in the gut, i.e. the gut microbiota, and after this change in perspective, the food consumed daily began to have a different value in relation to health and disease.

“In the last ten years, studies of the microbiota have exploded. The role of gut bacteria in relation to the development of multiple sclerosis is widely studied”he said via video call to Infobae the Argentinian researcher Sergio Baranzini, who leads a laboratory at the Weill Institute for Neurosciences, of the Department of Neurology of the University of California in San Francisco, United States.

Together with Jorge Correale of Fleni in Argentina and Reinhard Hohlfeld of Ludwig Maximilian University in Germany, scientist Baranzini has just published a review article in the journal. Nature Reviews Neurology about what is known (and not yet understood) about the role of the microbiota in multiple sclerosis.

“There are different published studies. In one of these papers we showed that the microbiota is different in patients with the disease compared to people who do not have it. When we analyze samples in the lab, we found that the type of bacteria that MS patients have has a pro-inflammatory profile, that is, it contributes to inflammation, which could be a condition that influences the immune system response and disease development. In general, in multiple sclerosis there is sustained inflammation,” Dr. Baranzini explained.

Read More :   “From Semak Samun to Kebun Bunga” Planting the Japanese rose next to the house!

There was also a study in Germany, led by Gurumoorthy Krishnamoorthy and in which Baranzini also collaborated, that examined 34 pairs of identical twins between the ages of 21 and 63. Only one of the twins had multiple sclerosis. The microbiota derived from the twins was transplanted into mice susceptible to a similar disease model in humans. And it was observed that mice that received transplants from multiple sclerosis patients had a higher incidence of the disease than those that received transplants from healthy donors.

Now researchers are trying to clarify the mechanisms that make the type of microbiota that can make a person more susceptible to developing disease. They also want to know if the microbiota can change the course of the disease after people have already been diagnosed. “In our review we detail the various mechanisms that are postulated today as to how the gut microbiota influences the altered immune response and in turn can affect the brain,” said Baranzini.

One possible mechanism is that the composition of the microbiota influences serotonin production in the gut. Serotonin is a substance that the human body produces naturally.

“It is estimated that 90% of serotonin is produced in a group of cells in the gut. Serotonin has different types of receptors, some of which are located in cells of the immune system. Therefore, serotonin may act not only as a neurotransmitter, but also by regulating immune function. In this way, serotonin would intervene in processes that favor inflammation or in others that control it,” he explained to Infobae Dr. Jorge Correale, from the Fleni Department of Neurology.

Jorge Correale, from FLENI in Argentina, collaborated with Balanzini to review studies on microbiota and sclerosis/Archive

“We know from previous research that there are genetic factors that predispose to multiple sclerosis: they are variations in the genome. But they do not explain all cases of multiple sclerosis. So it aims to take into account environmental factors such as where you live, previous infections, and now we also know that the microbiota plays a role. It is suspected that changes in diet, with more processed and ultra-processed products, have had some impact on the increased incidence of multiple sclerosis in the world. In Asian countries that have adopted more of a Western diet, there is a higher number of cases of people with multiple sclerosis,” said Baranzini.

According to the International Multiple Sclerosis Federation, there are 2.8 million people living with this disease in the world. “Multiple sclerosis prevalence has increased in all regions of the world since 2013, but differences in estimates remain”, according to Peer Baneke and colleagues in a paper published in 2020. The average age at diagnosis is 32 years. Women are twice as likely to develop multiple sclerosis as men.

Genome variations that increase the risk of multiple sclerosis have been discovered. But they are not the only factors that lead to the development of the disease / Kate Patterson

According to Dr. Baranzini, there have been many advances in the relationship between the microbiota and multiple sclerosis. But there is still no strong evidence to make more specific recommendations.

“Gut bacteria interact with the metabolism of others and with the human metabolism. This is essential to have a balance. We need bacteria to educate our immune system and help us digest food. In some people, there would be a dysregulation that produces an imbalance in the immune response, which could contribute to the development of the disease.”, He commented. “A healthy diet rich in fruit and fiber is probably ideal for disease prevention. But we cannot yet give a specific recommendation based on strong evidence for multiple sclerosis. We are doing a global study with many patients to clarify these types of questions,” he added.

The microbiota may also be key to the effectiveness of currently available therapies. “We are investigating the role of bacteria when patients receive therapies. In another field, such as oncological diseases, it has already been found that the presence of some bacteria can define whether the patient can respond well to the treatment. On the other hand, the role of the microbiota in the effectiveness of the 15 therapies that are already used in multiple sclerosis is not yet known,” commented Baranzini.

Microbiota-targeted therapies are also considered a way to treat people living with multiple sclerosis. One option could be to change the type of products consumed. But research is being done to learn in depth what types of changes should be made because the relationship between each of the nutrients and the bacteria associated with multiple sclerosis is not known.

Probiotics, short chain fatty acids and faecal transplant from donation from other people without disease.

In the review published in Nature Neurology ReviewsBaranzini and the other authors state that “therapeutic strategies targeting the microbiota – including dietary interventions, probiotics, short-chain fatty acids and fecal microbe transplantation – show promise for the treatment of multiple sclerosis, but further work is needed to evaluate. its effectiveness.

Short-chain fatty acids are “products that arise from bacterial fermentation in the gut, such as propionic, butyric, and acetic acid. These acids can be used as fuel by the intestinal epithelial cells to produce energy, or they can participate in the survival, development and functioning of immune system cells through their interaction with certain proteins,” explained Dr. Correale. There is the possibility of developing these short-chain fatty acids as therapy. “But the half-life of these acids in the body when administered exogenously is not yet known. For now, intestinal bacteria are the most efficient at transforming dietary fiber into these compounds,” explained Baranzini.

Today there are various drugs that can favorably modify the course of multiple sclerosis. Rehabilitation is also advised to patients/University of Plymouth

consulted by InfobaeAdriana Carrá, head of the department of demyelinating diseases at the British Hospital in Buenos Aires and medical director of the Argentine Multiple Sclerosis Association, commented after reading the published review: “The causes of multiple sclerosis are under study. Genetic factors, history of infections such as Epstein-Barr virus, vitamin D deficiency and gut microbiota. The published review shows us that we are getting closer to understanding how these factors influence the disease.”

“In the coming years we expect that there will be more results on the impact of the microbiota,” said Dr. Carrá. He pointed out that today there are different medicines which can favorably modify the course of the disease which can alter the personal, family, professional and social life of the patients. “While scientific research continues, today – said the doctor – accompanying and rehabilitation help to improve the quality of life.”