Since yesterday, a case of assault of MRSM Kuantan students has gone viral on social media. Facebook user Nazrah Mohamed claimed her son was one of the victims of the hostel assault.

He wrote again, the case that happened since June 17 has not yet received any action from MRSM management regarding the harassment of MRSM students.

The victim’s mother shared the timeline of the bullying and the existence of gangsterism in her son’s home. Not only school clothes are scratched and cut.

In fact, his son’s hair was cut while he was sleeping.

Several images with evidence of assault against the victim were also shared. More worryingly, the victim allegedly received threatening notes and left signs as if to warn the students in the dorm room involved.

The report of the harassment case involved students from Mara Science College (MRSM) in Kuantan yesterday. And received from the mother of the guardian and guardian.

The case is still under investigation under Section 427 of the Penal Code for the offense of treason. 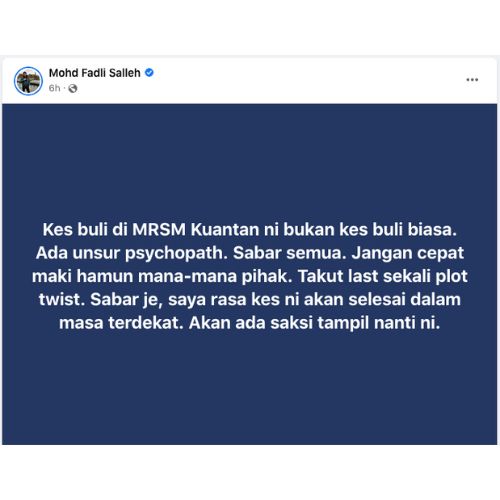 Commenting on the harassment case that happened at MRSM Kuantan, the famous teacher, Mohd Fadli Salleh asked the public to stop blaming the victim, the family or the guard involved.

“This assault case at MRSM Kuantan is not an ordinary assault case. There is an element of psychopath. Be patient everyone. Don’t rush to insult any party. I’m afraid of the latest plot twist. Be patient, I believe this case will be resolved in the near future. Witnesses will come.” 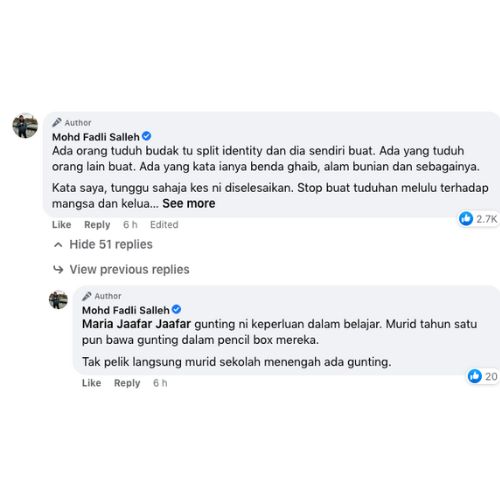 This is due to assumptions from netizens who were impressed by the news and made their own assumptions.

Some accused others of doing it, some also said it was caused by supernatural beings and elves. His message is for everyone to be patient and stop making rash accusations.

Of course, the case of school bullying should not be overlooked. His emotions involve not only the victim, but also the people around him.

We hope that the assault case of MRSM Kuantan students will find a solution in the near future.

Berry: The mother’s weakness is that the child should never take care of her not to threaten the ex-wife

As the victim’s mother shared on her Facebook page.

The case lasted at MRSM Kuantan Rasmi from June 2022 until today. We still don’t see a solution, but the case is getting worse and worse where our son and other students continue to be victims of betrayal and gangsterism. As parents we cannot remain silent. The following is a timeline of the cases that happened at MARA KUANTAN SCIENCE PRIMARY SCHOOL.

June 17, 2022 (Friday)
My child’s blue school uniform was found on the hanger and it was scribbled along with a batik shirt of a female student at the school in the same girls’ block. My son made a complaint to the senior F5 student and a roll call was organized to find the perpetrator but failed.

June 19, 2022 (Sunday)
My son’s yellow uniform found on the hanger had been cut at the arm. My son called and informed about the case and told the senior student that he is trying to investigate on his own first to find the perpetrator before informing the principal. June 20, 2022 (Monday)
I called the head manager to follow up on the case, unfortunately the head manager was surprised and didn’t know the problem. After being checked, the senior students admitted that they tried to solve the case themselves. (Question: MRSM’s procedure for serious cases like this is to let the senior students handle it themselves, without informing the principal???)

June 22, 2022 (Wednesday)
I called the head manager to follow up on the above case and was informed that they still haven’t found the perpetrator.
June 26, 2022 (Sunday) – morning

Another piece of my son’s blue school uniform was found scratched after he picked it up from the hanger. The same thing happened to my son’s roommate who had his PJ shirt scratched.

June 26, 2022 (Sunday) – evening
My son found that the toilet wall had been scratched and immediately informed the senior students. Senior students then inform the principal.

June 26, 2022 (Sunday) – night
My son was called by 5 guards and they pressured my son and forced him to admit that all the shirt scratches, cuts and scribbles on the toilet wall were done by my son. Whereas my son is one of the VICTIMS and he reported all the incidents to the elderly as soon as the incident happened to him. On the other hand, the school took my child’s complaint lightly and no written statement was taken by the school upon receiving the complaints. The school and principal couldn’t find the perpetrator, so they pressed my son as the perpetrator.

July 3, 2022 (Sunday) – morning
My son’s roommate found slippers stacked outside their room door and the toilet door was scribbled on. They took pictures and informed the senior about the matter.

July 14, 2022 (Thursday)
I called the Assistant Director of Student Development (TPPP) to inquire about the progress of the cases. On the other hand, TPPP has informed me that my child has been referred to the school counselor and is experiencing anxiety and has a very high level of stress based on my child’s conversation with the counselor. TPPP also said that my son should be referred to a psychiatrist for further treatment. (Question: In what capacity and expertise does the college continue to state that my child has anxiety and depression?)

Read More :   Khloe Kardashian admits she was depressed during her pregnancy

July 15, 2022 (Friday)
I took the child home and he told me that he was forced to confess by the guard about all the incidents. 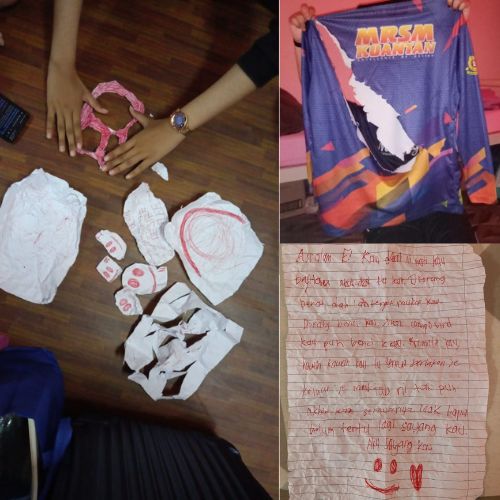 Take your child to a child psychiatrist

July 17, 2022 (Sunday)
I took my son to a child psychiatrist so we could really determine his mental health. Based on the clinical interview, the doctor declared that my son is healthy and does not have symptoms of anxiety, depression and stress as described by the TPPP. The doctor also suggested that my son undergo certain tests to confirm his level of mental health. The doctor also took my son’s statement based on my son’s story about what happened at school. Everything my son told the doctor was consistent with what he told us.

July 19, 2022 (Tuesday)
My child underwent all the analyzes suggested by the child psychologist and the results were that my child is PERFECTLY FINE, HEALTHY WALAFIAT!!! Based on the decision, we, husband and wife, have decided to meet the Principal, the school management and the principal to get an explanation and find out the progress of our child’s shirt scratching and cutting cases. July 22, 2022 – night
We have filed a police report against the school for cases involving our children after not finding a solution during a meeting with the school management. I have also lodged a complaint in SISPAA within the Ministry of Education Malaysia (KPM).

July 25, 2022 (Monday)
I filed a complaint with SISPAA under Ministry of Rural Development because MARA is under KPLB. 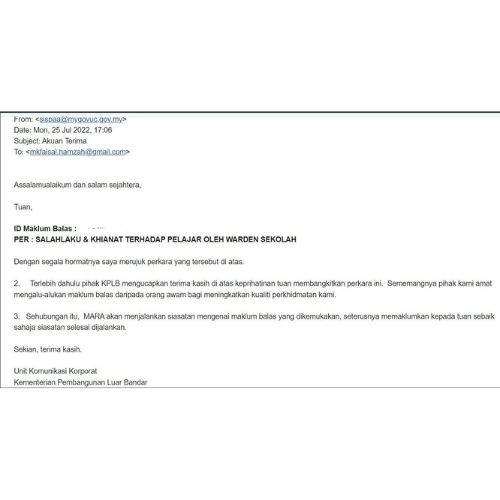 August 5, 2022 (Friday)
I got a reply from MARA and it was very disappointing because BERAT SEBELAH’s inquiry was only for the headmistress of the school. My son was not called to testify. MARA’s response also differed from the principal’s statement in which MARA stated that the school followed the correct procedure, but the principal admitted that the school made a mistake during the investigation.

August 7, 2022 (Sunday) – Morning
5 pieces of blue t-shirts for college activities were found by the senior students on the hanger and were cut up involving 4 students, including our child’s shirt. The principal took written statements from the students involved.

August 8, 2022 (Monday) – Morning
5 pieces of yellow school uniforms involving our son and 4 roommates were cut, including a piece of white school hijab belonging to our son that was cut. Once again, the students involved were called upon to give a written statement to the principal regarding the incident. My son called and reported the incident. We informed the IO who took our report on the 2 incidents. The police came to the college and interviewed the principal, my son and his roommate. The police also ordered the school to take my son to the station to take evidence based on the police report we made on July 22, 2022. Imagine our child who is not even 14 years old had to testify at the station for 2 and a half hours. All this is due to the slow and careless actions of the university, so we had to file a police report. We took our son home to rest the same day. In the evening, one of the Form3 parents informed us that his son had found a threatening note in his dorm room. His son’s room faces our son’s room. The notes are addressed to our son, El. We continue to inform the Chief Director, Director, TPPP, Exco-exco Muafakat and IO who are handling our child’s case. The IO advised the school to file a police report.

August 11, 2022 (Thursday)
I sent our son back to school to attend classes as usual.

August 12, 2022 (Friday)
Our son called around 6:50 to inform us that he and his 2 roommates got short haircuts while sleeping last night. Our kids and the students involved go on to inform the senior and the senior then informs the principal. Meanwhile, I have informed the IO who is handling our case. As in previous cases, the IO advised the college to file a police report with the station.

Until now, we are still waiting for an update from the maktab and the police.

MRSMKu is very slow to take action and investigate this matter. The indifference of MRSMKu management is totally unacceptable!

Cases are still recurring and to this day have involved physical contact. MRSMKu wants to wait until there is a loss of life before acting?!

MARA is also slow to respond and act even if a complaint has been made! The principals, TPPP, YDP Muafakat, NYDP Muafakat and part of the EXCO Muafakat MRSM Kuantan are slow to act and carelessly take the cases happening in this school. Maybe they’re all waiting for another death to appear to act!

We demand that MRSM Kuantan find the perpetrator IMMEDIATELY and impose harsh measures on him. We also want this matter to be resolved as soon as possible as it involved bodily contact and is no longer a case of gangsterism or treason but a case of CRIMINAL which is becoming more and more common in MRSM Kuantan. We do not hesitate to take legal action if the school and MARA still stop acting.