Skip to content
MENU
Gamescott / News / Ferrari had another huge mistake: the mechanics forgot a tire when Sainz stopped and the memes exploded 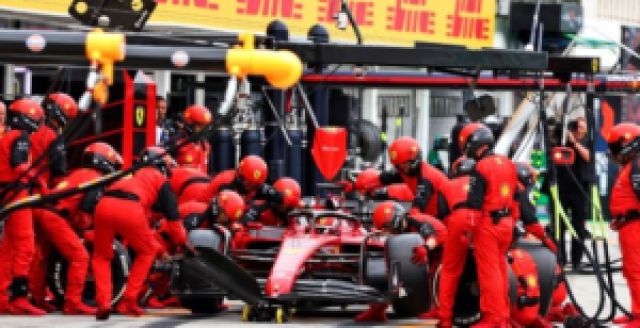 They had three tires ready, and the Spaniard’s stop took 12.7 seconds. He could have challenged for a podium, but finished eighth.

Ferrari excels Sunday to Sunday with its racing failures. This Sunday at Formula 1 Dutch Grand Prix It wasn’t for strategy but for stopping, a house specialty that has been trending on social media every time they make mistakes that cost drivers good points. In this case, the injured person was Carlos Sainz, whose first arrest led to an unusual situation where his mechanics had three tires ready.

Although it is the ABC of motorsports, the mistake was extreme. The tire they didn’t have ready was the left rear and so the 28-year-old’s stop took 12.7 seconds and saw him drop eight places as he pitted third and returned to track in eleventh position. .

Desperate to waste no more time, the Scuderia mechanics left behind the gun they use to remove and install tires and Sergio “Checo” Pérez stepped on it with Red Bull’s two straight tires. Moments later they wanted to repair that instrument in what was a tragicomic scene. This chaotic new panorama got fans into action and memes exploded on social media targeting Ferrari mechanics.

Ferrari mechanics had three tires ready instead of four, and the Spaniard’s first stop was 12.7 seconds (REUTERS/Christian Bruna)

“Today we are not satisfied. We were not fast. I made a mess of stopping Carlos. With Charles I was unlucky in strategy. We think Carlos lost his rhythm in the incident with Lewis. We will do our best at Monza”, admitted the head of the Maranello team, Mattia Binotto.

Added to the problems suffered by his partner was the panorama of Sainz’s frustration Charles Leclerc who also suffered other mistakes in the season of the Maranello team. It must be remembered that in Hungary made him pit and put hard tires on him which prevented him from having a good grip on the track and achieving a feasible victory. Or what happened at Monaco when they made him pit at the same time as Sainz and he lost time, which angered Charles. The last one with the Monegasque was at the last meeting in Belgium where he pitted on the penultimate lap and lost fifth place.

Sainz then worked his way up to finish eighth in a thrilling race that included a virtual safety car (to eliminate Alpha Taurus by Yuki Tsunoda) and a real one (to get Alfa Romeo out of Valtteri Bottas) and in the second neutralization the race was defined since the successful change of Red Bull with Max Verstappen, to whom they put soft tires (the ones that achieve the fastest grip on the track), allowed him to overtake. Lewis Hamilton (Mercedes), finish first and get their tenth win of the season.

His triumph in front of a cheering crowd left Max further cemented at the top of the championship where he added 310 points to 201 for Leclerc himself, who could finish third behind. George Russell (Mercedes).

This season, the Maranello team started as favorites with Leclerc’s two wins in the first three meetings and it looked like Verstappen would have a very difficult time retaining the crown. But the leap in quality that Red Bull had with its RB18, the Dutchman’s good handling and Charles’ lack of regularity due to his own and the team’s errors, confirmed the Dutchman at the top of the tournament.

Next weekend Leclerc and Sainz will also seek revenge against each typhoid as the Italian Grand Prix will be contested at the legendary Autodrom Monza.