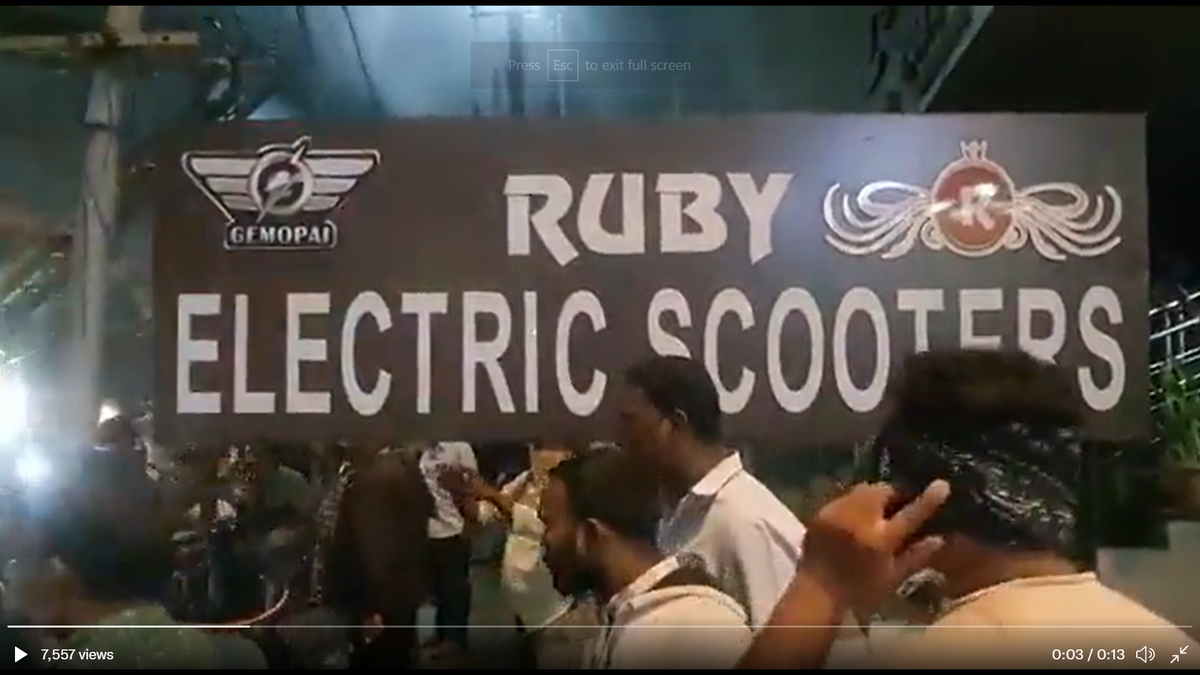 Eight people were killed and several others were injured in a fire that broke out last night at an electric bicycle showroom in a hotel in the southern Indian city of Hyderabad.

Photos and videos show the frantic rescue that took place late Monday as several people collapsed in thick smoke and two people jumped from the window of the four-story building.

This is one of the latest and most shocking incidents of e-motorcycles catching fire as the country grows concerned about the safety of the vehicles that the Indian government plans to push as part of its green efforts.

All the victims were in a house above the showroom, said senior police officer Deepti Chandana. The incident took place in Secunderabad area of ​​the city.

“When the police arrived here, the showroom and the residence were engulfed in heavy smoke. The first rescuers and firefighters were able to save several people using ladders,” she told reporters at the scene.

“Some rescuers climbed the stairs and brought down at least six unconscious people. They collapsed near the stairs for shortness of breath.”

“The cause of the fire is yet to be ascertained. All the electric bikes in the showroom were burnt,” she said.

An investigation has been launched to find out the cause of the accident but the police told the Indian media that the fire broke out in a warehouse where there were 40 electric bicycles.

It is suspected that the bikes were kept in charging mode during the evening, which may have led to the fire.

The owner of the accommodation was also booked for inadequate fire safety arrangements.

“The shelter had 25 clients on four floors at the time of the accident. They only had one way out. They are trapped inside. We have registered an FIR against Rajender Singh Bagga and his two sons. The investigation is going on,” said one of the officials Indian Express as he said.

The newspaper also said that the owners of Ruby Motors were illegally running an electronic business in the basement of the building where the explosion took place.

While the state government and Narendra Modi’s central government have both announced compensation for the victims, questions about the safety of electric vehicles have been rising in recent years with several accidents where motorcycles have caught fire.

Chennai has reported four cases of electronic fire related fire in four days in March this year. Since then similar cases have been repeated.

On March 26, a Twitter user posted a video of a black Ola e-scooter full of smoke. got a virus social media. Another fatal fire on an Okinawa battery-powered motorcycle has reportedly killed a father and child in the southern state of Tamil Nadu.

These developments come as sales of electric motorcycles have more than doubled in India in recent years. They are credited with driving the country’s electric car market, unlike in the West where cars like Tesla are driving growth.

Motorcycles as cheap as £1,000 pounds or less have emerged as a viable option for India’s middle class on the country’s congested roads.

The Indian government wants electric motorcycles and scooters to make up 80 percent of total two-wheeler sales by 2030. The government has been pushing the electric vehicle market and plans to build better supporting infrastructure like toll booths.

But there are deep issues with e-bikes in India. EVs are powered by lithium-ion batteries that are considered safer, more efficient and lighter than their counterparts. However, these batteries pose a fire hazard if handled incorrectly.

Experts often point out that the main issue is short circuits in batteries which are due to poor-quality cells or improper battery management methods.

The government has also created a committee of experts to look into the reasons and hold the companies responsible for the poor test standards.

However, there is also a debate about how much of the blame should be assigned to India’s worsening heatwave. Some experts say that because motorcycle parts are not tested in extreme temperatures in India it is likely to catch fire, while others reject the idea.

But public calls to strengthen India’s testing standards are set to grow as the country embarks on an EV revolution.