Skip to content
MENU
Gamescott / News / "Because of the pod, my chest was pierced..." - This young man shares his injury from smoking a pod, make it a warning! 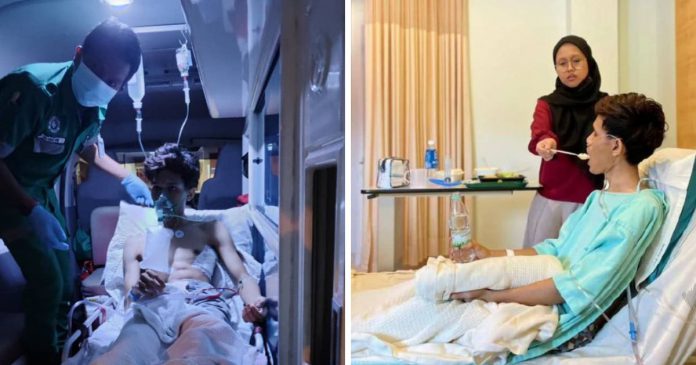 The experience of feeling pain to the point of causing serious effects will definitely have an impact on a person. This is also the story of a young man who was determined to stop smoking pods (e-cigarettes) when his lungs developed a leak that forced him to be punctured immediately!

“What happened made me shudder and it became the starting point to stop smoking pods (e-cigarettes),” said Faizin Azmi.

Faizin’s story gained attention after he shared his experience of being hospitalized until his chest was pierced via Twitter. Citing news shared by myMetro, it is understood that 24-year-old Faizin is currently receiving treatment at a private hospital after suffering from a “spontaneous pneumothorax” or sudden short lungs as a result of his addiction to pods.

Recalling the day of the incident, he said “Around 9 am (Thursday), I woke up from my sleep and went to the toilet. At that point, I felt a tightness in my chest and it reminded me of a muscle sprain, so I applied wind oil, but I managed to tell my mother before I passed out.”

“After I woke up, it was evening and I realized that the chest was pierced and a tube was put on the body. What I remember at that time is that I was put on a ventilator and transferred from Putrajaya Hospital to the current hospital,” he said. Faizin said his condition is improving now, but he still needs to rest and receive treatment at the hospital. Announced in the ward, he was accompanied by his parents.

Tall, thin and stubborn smokers are the natural risks

“According to the doctor, the pneumothorax was caused by liquid from the pods we smoked blocking the lungs and those who are tall, thin and heavy smokers are at risk of developing it.

I’m a self-confessed pod smoker and made it an alternative after quitting about seven years ago.

“I thought about quitting before, but it was quite difficult because I myself have been smoking since I was 14, so I’ve been addicted for a long time.

“There may be some wisdom in what happened and I am grateful that God gave me a second chance to live. I hope this will be the reason why I stop (smoking pods) forever,” said the Bachelor of Business Management student at Heriot-Watt University, Putrajaya, at the end of the conversation.

INTERESTING ARTICLES : Does the dough not rise? This woman shares the reason for yeast!